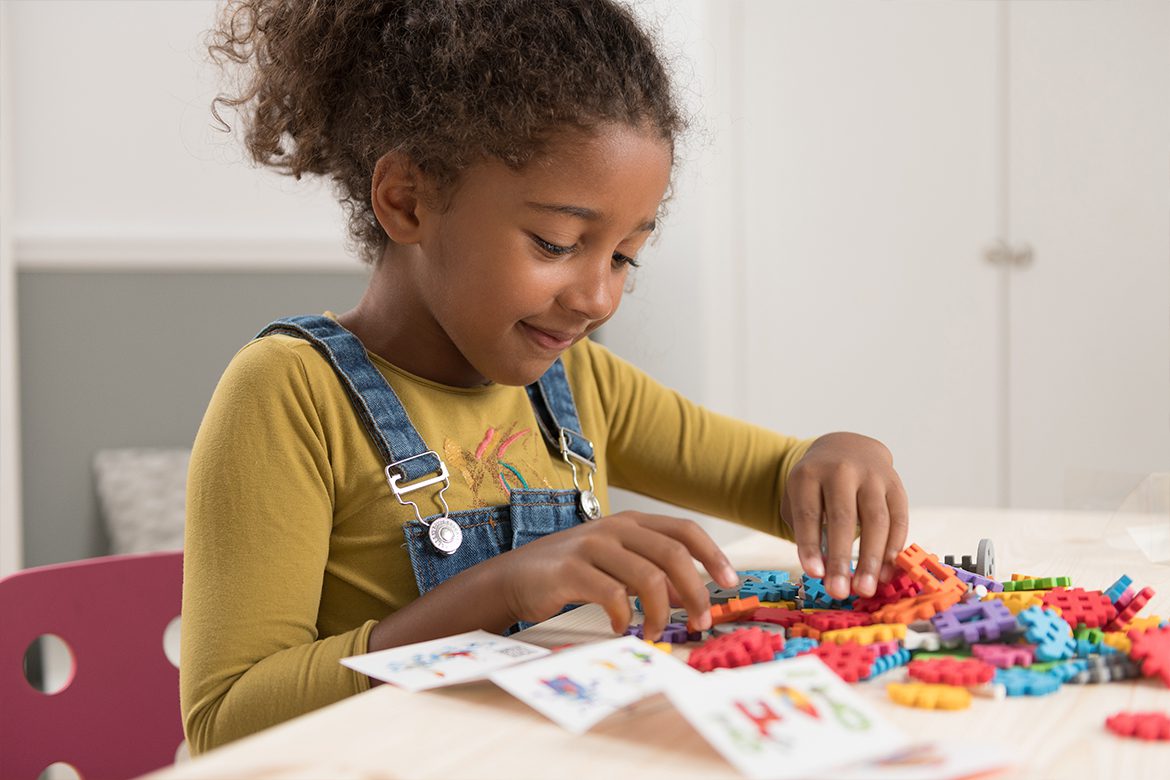 EDUCATIONAL PLAYING WITH THE USE OF MARIOINEX WAFERS

Arrange a vertical pattern of wafers and at the same time call colours – encourage the child to repeat. Ask your child to say when he or she remembers everything. This is an important element of playing because it teaches independence in the assessment of how much time is needed to remember something. Cover the pattern and ask the child to put together the same pattern. Then show your pattern and ask if it is the same. It’s important that the child compares the designs on its own. If it turns out that the pattern looks different, encourage the child to remember your pattern once again, cover it again and after that the child can makes corrections. More demanding version:

Arrange the pattern with the shape for exaple: a square. It can also be a “picture”: home, car, cat – the more creative you will be the more fun your child will have. For older children, it will be attractive to create three-dimensional constructions: start from the creation of a colourful cube. When creating next constructions, be guided by your imagination and the child’s abilities.

Tell your child pattern to remember for example: red, blue, yellow, red, blue, yellow. The child can repeat the colour names after you to make it better remember them. At this time, wafers should be covered or hidden in a box – then the child can rely only on his or her hearing, which improves his auditory awareness – so important when learning at school. After two or three repetitions, the child places the memorised sequence. If during the game it turns out that he or she doesn’t remember what the order of colours, is the best to go back to the previous stage instead of telling which colour to choose. This affects not only the auditory memory but also teaches perseverance and builds self-confident – the child on their own remembered everything. When the child has finished, the adult slowly repeats the previously said sequence – the child independently controls whether he or she has put the wafers correctly.

Prepare wafers in any number of colours and then cover them. Instruct the child that the pattern will consist of for example: two rows (one under the other): that is first pink, blue, green, and later red, blue, grey.

First, create your own flat pattern but don’t show it to your child. Then, instruct your child, for example, first put a red one, under a red one yellow, put a blue one on the right side of the yellow one, put a green one over the blue one. If you see that the child puts the waffle in the wrong place, you can ask them: which one it’s the right hand? or if the cup is on or under the table? Educational proposals presented using the Marioinex wafers are just a small part of the possibilities they offer. In each of the games the child has the opportunity to improve the small motor skills that play a key role in learning to write and playing is great opportunity for language exercises. In all games it’s important to involve the child – it chooses the colors of the wafers, assesses if had

enough time to remember everything and also independently checks whether the task has been carried out correctly. It is also important to change roles. The child builds a pattern for parent or says in what colours parent have to arrange it. Most children love to “teach” adults and by the way, we can practice our own memory and mindfulness.